Zen Courtyard House, located in Singapore's Luxury Island Resort of Sentosa Cove, is built on a long narrow plot with views to the rear of the Sentosa Golf Course. Robert Greg Shand Architects' design inspiration for the home was a traditional Japanese courtyard house, with rooms spilling onto terraces that surround a central courtyard garden. Combined with a holistic approach to sustainability and climactic needs, this contemporary beach house in Singapore is a refreshing escape for the family that owns it.

The courtyard becomes the primary focus of the contemporary home and an integral visual element for each room. This effect is emphasized architecturally by blurring the division between the courtyard and the rooms by extending the second storey ceiling over the courtyard in the form of a trellis, and having materials flow from the exterior into the interior.

With no sea views, water was used as the primary element in the courtyard landscape design to reference the seaside location of the house. A large reflecting pond in the courtyard and the swimming pool at the rear were built to wrap around the house, with shading by a trellis roof that spatially integrates the external courtyard with the surrounding rooms.

The front elevation of the beach house consisted of two blocks clad with groove-cut travertine marble and a large teak picture frame to mark the entrance. The external marble cladding is brought inside the contemporary home, blurring the line between the interior and exterior.

Zen Courtyard House is spread over two levels with living, dining, kitchen, gym and a guest bedroom on the ground floor, while the second floor has three bedrooms including the master bedroom and study. All bedrooms have attached bathrooms.

The Master bedroom has a large dressing area and open concept bathroom with a cantilevered recycled teak vanity with his and hers basins. LED lighting has been used to highlight the high recycled teak ceiling - the reflected light providing a warm diffuse glow for the room. The master bedroom links to the study via a covered balcony. 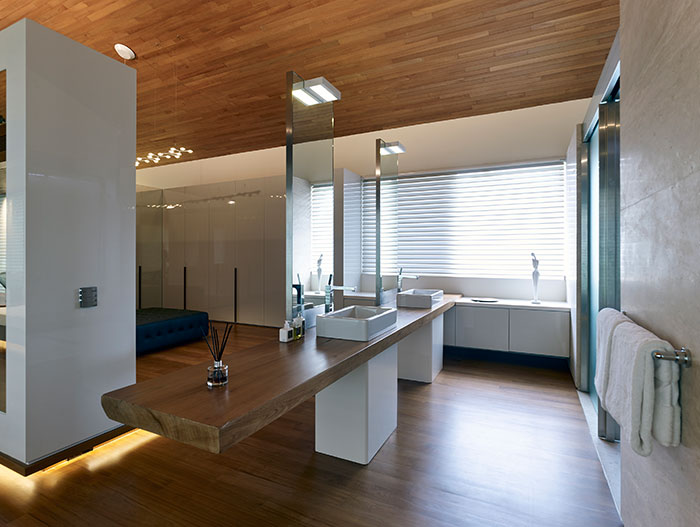 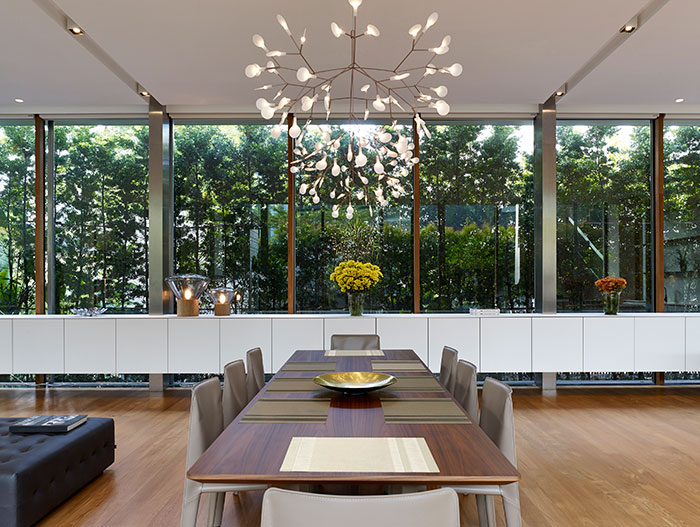 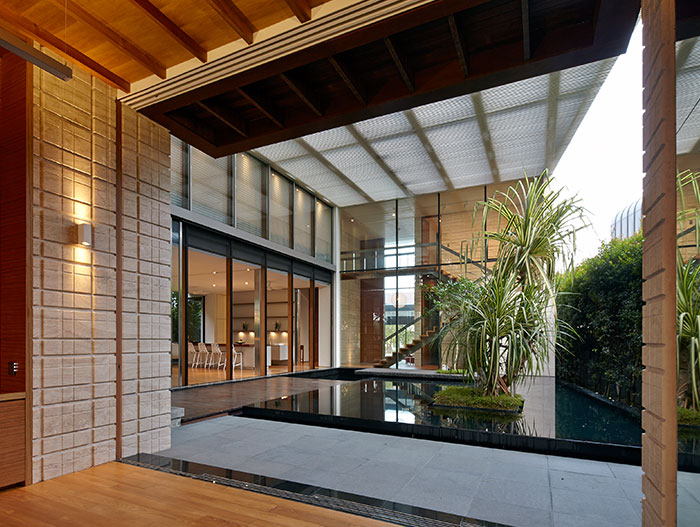 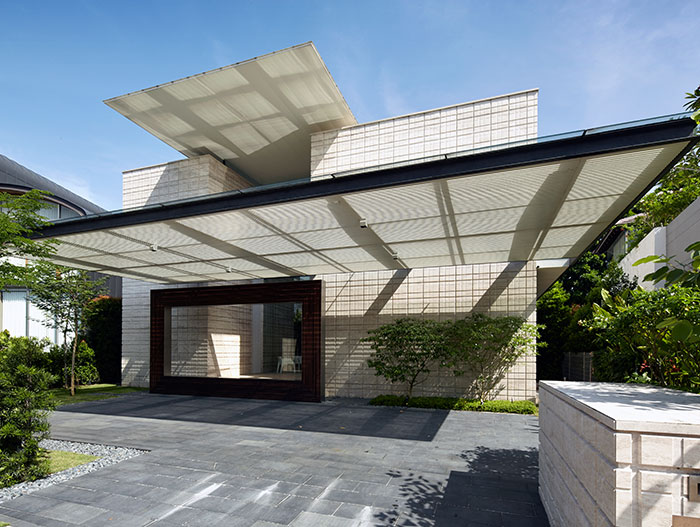 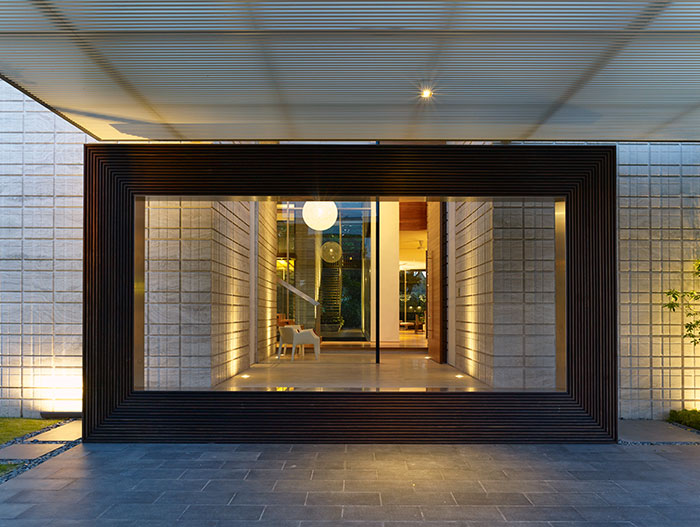 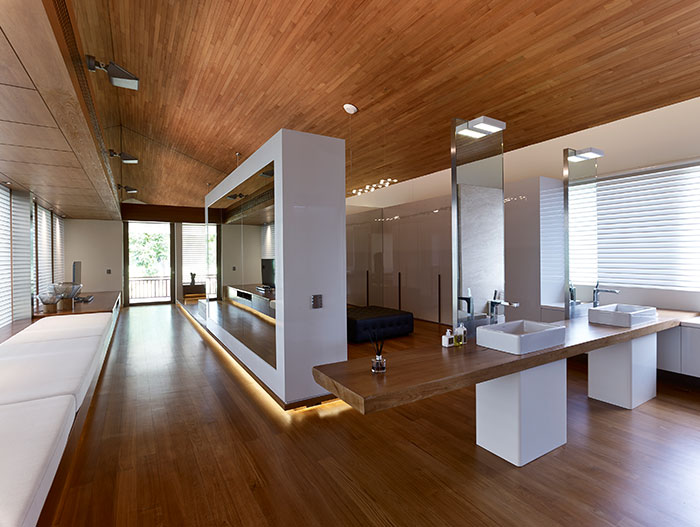 "By separating the gym and study wing, the idea was to open up the house to get glimpses of the golf course behind, and give the feeling of living in a resort garden oasis rather than a typical house."

A suspended staircase set against a feature wall of groove-cut travertine marble links the courtyard with the study and master bedroom balcony. The staircase and entry hall are another focal point, with their double height ceiling and bridge leading from the stairs to the bedrooms.

Passive sustainable design was incorporated through the large canopies, trellises and roof overhangs to naturally shade the rooms and keep them cool. The trellis roof also shades the courtyard pond and filters solar radiation. The rooms’ full height doors (designed to conceal locks and handles) fully slide away to open up to the courtyard, providing ample cross ventilation.

We’re no strangers to Robert Greg Shand Architects’ attention to detail. We’ve previously featured their sophisticated Sentosa Cove holiday retreat for a family living by the sea. Past or present projects, the end result is almost always the same: a contemporary home that is bright, airy and exudes a Zen calmness.

This stylish villa embodies the comfortable life on the Italian Riviera

Contemporary Brazilian house for an art collector by mf+arquitetos 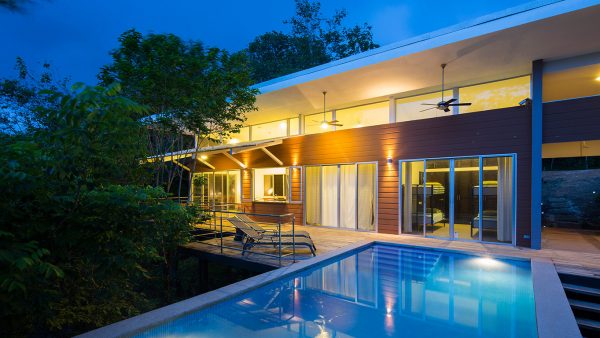 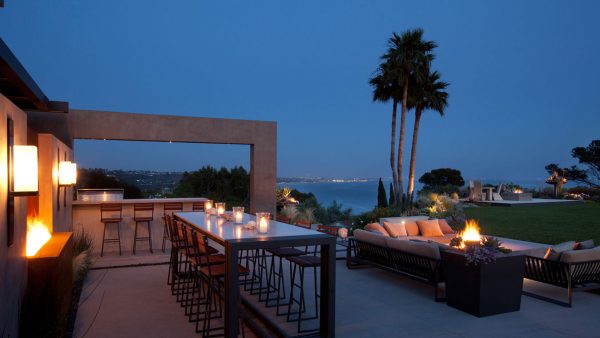 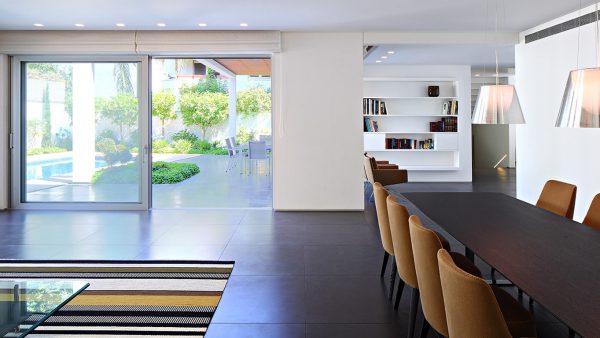 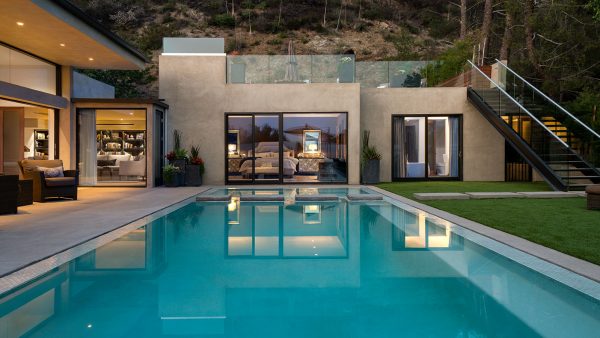 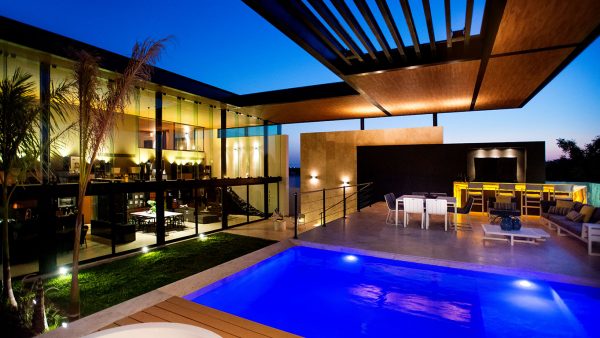